It’s been a few days since the most extravagant wedding of the year, Dra Vicki Belo and Dr Hayden Kho’s wedding. We still can’t get enough of them.

Here are some more behind the scene stories from Inquirer writer Thelma San Juan.

According her, there were absolutely no gatecrashers. There were some fans that lobbied near the church and had high hopes that they will be able to enter the venue. But the staff seemed to be stern and firm under the command that only those in the guest list shall be allowed inside.

There were even fans who chose to do a stake-out the night before the wedding, still hoping to see some of their celebrity idols who will be attending the wedding. One banner even had Alden Richard’s name on it.

Photo taking was also prohibited in the church. There were also no yayas.

As it turned out, the Dantes family had to tend to their daughter Zia who is just almost two years old.

It was fun to see Dingdong and Marian Dantes look after baby Zia themselves, with a Fendi baby bag that slung on Dingdong’s shoulder. He was still dashing as a baby sitter. Regine Velasquez-Alcasid and Ogie Alcasid’s son Nate was also part of the entourage.

Regine had to sit Nate down with her to feed him. Georgina Wilson’s husband is one fashionable father. Arthur carried baby Archie most of the time or attended to him in a stroller.

Perhaps the little girl got too tired of walking around, playing with friends, and just being an overall party-stunner, she made some really funny remarks.

Stories have been told that she had this funny conversation with Marian and Dingdong’s little princess and her favorite buddy, Zia. Scarlet was feeling under the weather during the wedding. She didn’t seem to be her usual bubbly self.

Zia, being a good friend was trying to cheer her up and engage her. So poor Scarlet was really not in the mood. And so, in a very loving and charming way that only she could pull off, she said to Zia “I need my space.”

This was one anecdote that was told and retold with good laughter in the wedding.

Can you believe this kid? She is oozing with cuteness!

Zia and Scarlet will sure grow up to be the best of friends! 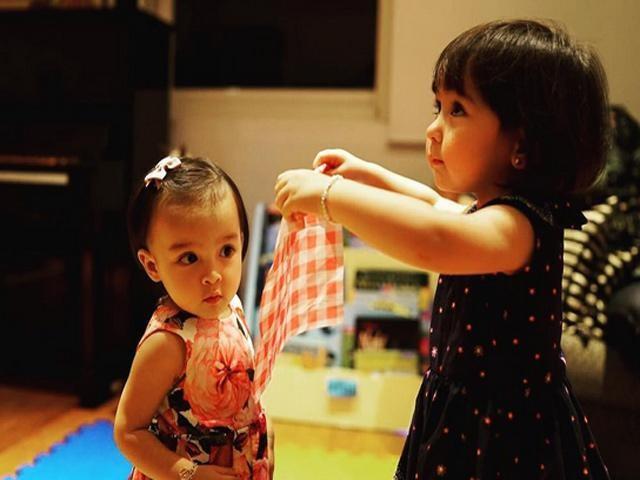